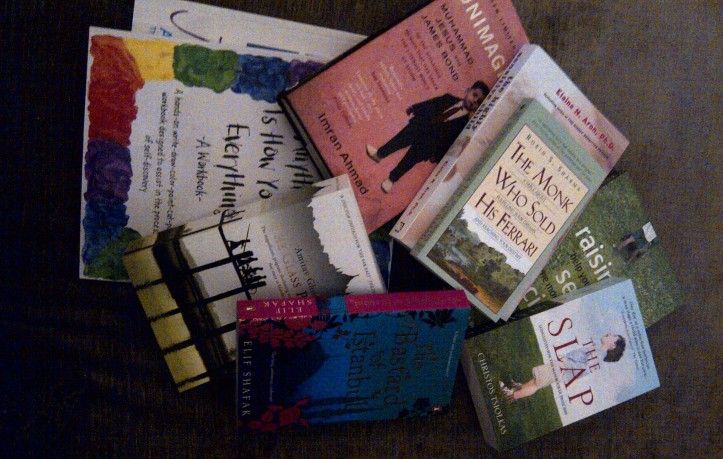 Three material things that make me intensely happy; Technology Art and Books. I love bookshops. I love the smell of new books. I have never gone into a book shop and left disappointed… ever! So my shopping spree didn’t go exactly as planned. My Credit card decided not to cooperate, but only after I bought my kids the things they needed. Once I got to the things I didn’t necessarily need but wanted very very much I heard the horrible sentence any shopper dreads to hear from the assistant “Do you have another card? Would you like me to try again?”.  No, I don’t have another card. At least not one that is working, and yes do try it again because I actually planned well this time and have money on my credit card!

Anyway, a few phone calls to the bank and I find out they put a block on my card because of ‘unusual usage’ (even though I told them I was traveling). But I guess the shock of the card being used someplace other than I tunes or Shop Bop was too much for the Visa people to handle. Lovely bank person called Ahmed was helping me out and the whole process took ages.

My card didn’t work again till 7.30 pm! when I found myself in front of a huge bookstore in Dubai mall called Kinokuniya Book World. Aaaah, the smell of books! there was no better place to spend the last precious hour of shopping than a huge book store!

I am trying to get S interested in reading books since he is at a level where he can read to himself. J and even Baby B love being read to but that does not necessarily translate into loving to read. I have been trying to encourage him by using a method someone told me about. I told him that if he read a book and wrote a short review (half a page or a page) I would pay him for it depending on how good the review was. He’s halfway through his first novel, lets see how it goes.

So here it is, what I finally ended up bringing back with me from Dubai. Sure, it’s not a dinner set that I actually need for the house, or a dress for the special occasions coming up in the next few weeks. But it is what makes me happy! As S said to J “You have no idea how much fun it is to read” (Although he didn’t pick up the book since he said that and I was within earshot so not sure how genuine that comment was. Lets decide it was).

The Bastard Of Istanbul by Elif Shafak.

This is one of those books I have been hearing about a lot lately. Synopsis: One rainy afternoon in Istanbul a woman walks into a doctor’s surgery. ‘I want an abortion’, she announces. She is nineteen years old, and unmarried. What happens that afternoon is to change her life, and the lives of everyone around her. Twenty years later, Asya Kazanci lives with her extended family in Istanbul. Due to a mysterious family curse all the men die by age 41, so it is a house of women, among them her beautiful, rebellious mother, Zeliha, clairvoyant Auntie Banu and bar-brawl widow, Auntie Cevriye. But when Asya’s Armenian-American cousin Armanoush comes to stay, long-hidden family secrets and Turkey’s turbulent past begin to emerge.

The Glass Palace by Amitav Gosh

Was drawn to it by the cover (yes yes I see the superficiality of this and the whole ‘don’t judge a book by its cover’ thing well I did. Lets see if I was right) plus I am more into reading about the east these days rather than the west. Synopsis: Beginning in 1885, with the British invasion of Mandalay and the capture of the Burmese king and queen, and encompassing over 100 years to modern-day India and Burma (Myanmar), Amitav Ghosh has created in The Glass Palace a monument to life in colonial central and Southeast Asia. The story follows three generations from three families, spreading its wings across the world, from Malaya to New York. The map at the back of the book is useful for following the characters’ travels as their fortunes and rulers (British, Japanese, military government) change, but it is the atmosphere and feel of the era and location that Ghosh captures astutely. Each city or border is not a mark on a map with political significance but a home, a memory and a reality.

The words “Mohammed, Jesus and James Bond” caught my attention. I am in the middle of reading this one now and loving it! It is a memoir written by a Pakistani muslim man who grew up in London. It is funny and so interesting to read as it explains so many things I have never been able to explain to my non muslim friends. I am only halfway through so not sure how it will go. It is a memoir that isn’t miserable but a witty and easy read. The dedication in his book is: For my father, who was always love and forgiveness. I’ll see you again Dad, but there is absolutely no hurry. So far I highly recommend it.

Raising a Self Disciplined Child by Robert Brooks and Sam Goldstein
First thought that came to my head when I saw this “That seems like less work for me… if they self disciplined themselves then I’m set for life! I could have a dozen kids and be fine!” Synopsis: Raising a Self-Disciplined Child is the groundbreaking book parents have been waiting for–a remarkably positive approach to a style of discipline that builds children up-from the acclaimed authors of Raising Resilient Children. Filled with realistic, practical strategies and sample scenarios, it shows you ways to teach children of any age, from preschool to adolescence, the value of self-control, self-reliance, and self-assurance–the all-important skills that will last a lifetime.

The Slap by Christos Tsiolkas

The idea behind this book was interesting to me because I wanted to hear all sides of the story. Because if this happened 20 years ago it wouldn’t be a book! But in this day and age it is a novel, and a long one at that! (Almost 500 pages). Synopsis: Winner of the Commonwealth Writers’ Prize 2009, this title is an international bestseller. At a suburban barbecue one afternoon, a man slaps an unruly 3-year-old boy. The boy is not his son. It is a single act of violence, but this one slap reverberates through the lives of everyone who witnesses it happen. In his controversial, award-winning novel, Christos Tsiolkas presents an apparently harmless domestic incident as seen from eight very different perspectives.

The Monk Who Sold His Ferrari by Robin S Sharma

This is the selection for my next book club meeting. Honestly, I am not so much in the ‘get rid of your worldly possessions’ phase of my life. I am more in the ‘get enough pretty shiny worldly possessions for my new house’ phase in my life. I would rather be reading ‘The Monk Who Bought a Ferrari and an Audi and a private jet but still gave loads and loads to charity’ Have yet to start this one. Synopsis: When Julian Mantle collapsed in the middle of a packed courtroom he was propelled into a spiritual crisis and was forced to confront life’s big questions. In this text, Julian instructs and enlightens. Found it in the self help section…

Have you read any of these? Can you recommend any? Or save me the misery of reading something terrible?