Note about this salvaged piece of work. It was edited and finished to a much higher standard than this but that seems to have disappeared somewhere and some unfinished version replaced it which was published by mistake… twice. So this piece must see the light although it is really a fluff piece. It may be amusing though.  Also I am rushing out the house because I am late so if there are any mistakes I will fix them tonight!

I woke up today 5 minutes after the children left for school but that was ok because that’s where I was headed anyway as soon as I had enough coffee in me to function. I got ready and was in the car at 7.50 about to leave the house when I notice a missed call from the school office. Now I knew what this was but I was hoping I was wrong.

First a side note about my kids school; it’s like a second home to me and I am close friends with a few of the people who work there so when I got a call from R from the office there saying S is asking if I left the house or not as he was worried I would miss portfolio day she received my huffy puffy annoyance at the fact that he didn’t trust I would make it.

“your kids love you B” she said. Yes I know but apparently they have zero faith in me! Moving on. I arrived at school, popped my head into the office to say hi and headed up to my daughters first grade class. She was outside holding a box of chocolates she was offering to the parents as they walked in. “MAMAAAAAA! Have a chocolate! Not this one it tastes of coffee! it tastes of coffee!” not sure how many she had sneaked at that point but thank God it was so early she could burn it off.

J’s class was full of parents and children showing them all they had done during the school year. It was full of her little drawings and stories (Things like vampire dogs and what not) as well as stories that were weird to say the least but that’s how my family rolls. It was great to see her progress from the beginning of the year to now.

Then we moved on to the Arabic part of the portfolio and we could also see a huge difference in handwriting as we flipped through the pages. Then we came to a piece she had written and she asked me to read it. It said ‘Mother I love you and I pray God will grant you a long life.’ Then next line said ‘My mother loves me a lot. She cooks my food for me and washes my clothes. God keep my mother safe.’
Ummmmmm…. ok. So obviously J has another mother she’s hiding some where. Not sure how I feel about that.

Then there was the piece about her father that went like this ‘I love my father. He works all day. He buys my books and my clothes and toys.’ Yes of course the mother would be the one to cook and clean and the father the one who works and buys things. Although the reality in our family is that the mother works and doesn’t get paid (yet, God willing that will change soon).

I left J’s class and headed to S’s class where he greeted me with a huge hug and lots of joy. I asked him why he had them call me “I’ve never missed a school thing in my life!” S:”Except once”. God help your wife mr S if she ever forgets anything! One measly 5 minute parade I missed and he lords it over me. Anyway I figured now wasn’t the time to argue with my son. He opened his portfolio and again it was full of lovely work. Mostly the stories he has written as this year they focused a lot on different genres or writing and different writing styles

Then we went onto his Arabic section which was also very good. Then came the French. Now apparently my son can speak french. I wouldn’t know this since he has never done so with me and usually does his French homework independently. I was looking forward to seeing his level and what types of things he was doing.

I flipped through the pages of vocabulary and grammar work sheets till I came upon a page where the teacher asked him to illustrate and write what each member of his family loves to do for fun.

Here is what he drew 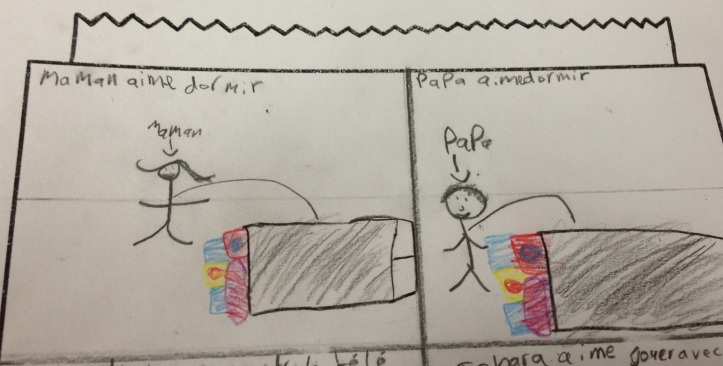 So I was sitting there in his class with all his teachers surrounding us reading these sentences out loud. I looked at him and said “seriously? Seriously S? Sleeping!”. I just left it at that. Was ‘dormir’ the only French word that came to mind at that point? Or was my son trying to be funny?

Now the cliché about Saudi’s is that they stay up all night and sleep all day and yes there was a time when I did do that but not in his life time! Or when he was aware of having a life to be exact. Don’t get me wrong though, I do love sleeping but it is not, by far, my favorite thing! If it was between sleeping and eating then eating would win!

Maman aime mange!!! Whats so difficult about that I ask you? Papa aime voles!

Leave a Reply to Mama B Cancel reply