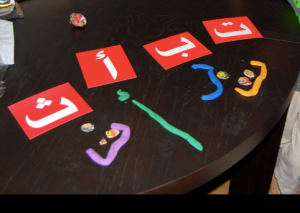 My son is moving schools. Although he vehemently does not want to. Even as I write this have some doubt whether I will be doing the right thing by moving him out of an environment that he is happy, safe and comfortable in. The reason I am moving him is simple, he will get a better education in the other school. There is no question about that. We have been talking about it over the last few weeks and every day he comes up with reasons he should not move.

He said to me today: Mama, I told Mohammed that I am am going to change my school and he said ‘You can’t change! who will help me fight the monsters?’. You know mama there are three monsters at school and without me Mohammed can’t fight them on his own. You know what else he told me? he said “who’s going to listen to my songs that I sing? no one listens to them but you!” He’s my BFF’. That sound was my heart breaking!

I feel like I am forcing him to do what I want in order for him not to need me to tell him what to do in the future. Does that make sense?I feel that if he continues in the traditional, arabic school environment where they are not really challenged to do much and there is no respect for the class room, for the teacher or the subject, that I will be setting him up for failure. There’s no spark or pride in what he is doing and they are not truly held responsible for anything.

He came home today all excited and said “They told me that on the 100th day of school all the mothers can come to class! we will have pizza and coke and we can all bring our psp’s and ipads!” Why?! Why bring the bloody ipads to school! seriously people! We are having enough trouble getting them off the damn things when they are home why let them bring it to school! And did you give a thought to the children who do not have PSP’s?

Things like that frustrate me to no end. I am able to send him to a school where they have sports days where the kids actually play sports on teams and not everyone wins. And they actually take turns being captain as opposed to always giving it to one boy (usually the most persistent one… which in our case is usually S) His teachers and coaches tell me “he always asks to be the leader… and we let him. He is a sweet boy”. He is a sweet boy, and a smart and polite boy who, thanks to his teachers, is learning that he always goes first, he always wins, he always gets what he wants by stamping his feet and being the loudest. Not a good tool for the future.

The school I am considering also has Arabic, French and later on Spanish and German. I personally don’t care if he doesn’t take French Spanish or German classes. I just want him to have the option to. They travel on school trips, compete with other countries in sports. They take social responsibilities seriously and encourage the children to have their own cultural identities while accepting others. I feel like I have a chance to give him these great opportunities in life and if I don’t it is unfair to him.

It is an international school. With a mostly international student body. There are some Saudi’s there and there are some muslims. Am I risking alienating him from his society? Maybe. He has a good network of friends and cousins who he can see on week ends. But as I wrote in an earlier post he will be spending most of his day in an environment that is different to his and will have to find a balance between that and his own culture.

To tell you the truth, I am not worried about his Islam and beliefs because that is taught at home. God knows I did not get my religious beliefs from school. Everything was ‘Haram’ and there was zero spirituality encouraged. What I am worried about more is his language, the slang words boys his age would be using, the subtle social cues that you only learn by being at school around your peers. How’s he going to pick that up?

But in the end, it is my duty as his mother to make these decisions for him. He is 7, he does not know what’s best for him and I would be failing him by not trying to give him the best chances in life. It sucks that he will miss his friends, it sucks that he actually loves his school now and has so much fun in it because most probably he will not have time to have that much fun in the new school. Meanwhile, I am going to go make Mohammeds mother my new BFF and make sure they get to see each other every week-end.

What are you thinking? Cancel reply